After making 300whp on my old USDM EJ205 with a 18G I decided I needed more power. Nothing was wrong with the old EJ205 but I knew it wouldn't be able to handle the power goals I was aiming for. I decided to sell the engine while it was still in good running condition so I could make some money off of it. But now I was left with the question, which is the next powerplant that will power my 2002 Bugeye WRX? I was considering a hybrid EJ257 with the EJ205 heads until one of my friends introduced me to the EJ207. He had a 2005 WRX with a EJ207 swap with a 18G that made about 350whp, and after taking a ride I knew I was sold. Ok great I finally picked my engine, but now where do I buy one? I spent days researching different vendors and reading people with terrible experiences on ebay until I found JDM Racing Motors. After reading many positive reviews online I decided to give them a call. I was greeted by friendly and extremely helpful staff who were able to answer any questions that I had. They sent me a ton of very detailed pictures and made sure to include pictures of any damaged parts ahead of time. I placed my order for a Version 7 EJ207 and ECU, within 5 days it was in my garage. The engine itself was extremely clean with everything intact. No surprises, I got exactly what I paid for and saw in the pictures. I took care of the main maintenance (timing belt, water pump, pulleys, minor gaskets, etc.) before installing the engine into my car. I also fitted my engine with a Forced Performance Green turbo, ID 1000cc injectors, Perrin equal length header, Grimmspeed uppipe with a Tial 44mm external wastegate, IA performance AVCS wiring kit, and to finish it off I added a AEM methanol injection kit.

After having the engine ready to drop into the car is when I realized that my glassbox 2002 WRX transmission will not be able to handle the extra power. I called JDM Racing Motors again and they were able to help me choose the right transmission. I picked up a 6 speed swap with Brembos, axles, drive shaft, cradle, and hubs. Once again JDM Racing Motors was very helpful and provided A TON of pictures so I knew what exactly what I was getting. They even sent pictures after it was wrapped up on a pallet with a sheet of paper with my shipping address on it. The install itself was extremely straight forward. I had pulled a handful of Subaru engines before so the swap for me was not too difficult. Everything lined up and bolted in as it should. The engine and transmission are in the car and I have a base map from my tuner, everything is set to go. I prime the oil pump, plug the fuel relay back in, and turn the key. It fires up first try. I drove it down the street and back and let the car idle for a bit. No knocking, sputtering, leaks, exhaust smoke, etc.

After about 2000 miles and a couple oil changes I brought it over to Paul Scott of East Coast Swappers in Windsor Locks, Connecticut. ECS Performance is known for the Subaru swaps in all years and models. Paul also has extensive experience tuning the EJ207 engines. We were able to make 404 whp and 352 ft/lbs. at 22 psi on pump/meth. The car was a blast to drive in the higher RPMs, but the lag from the journal bearing FP Green made the car somewhat sluggish down low and left more to be desired(Didn't spool until 5600 RPMs). After about 13,000 miles on the FP Green setup I decided I wanted quicker spool while pushing the limits of the EJ207. After talking to Paul at ECS, I decided to switch to a Precision 5862 dual ball bearing turbo with the .63 A/R turbine housing to help with spool. The guys over at ECS custom fabricated a downpipe and intercooler piping with a blow through MAF housing to work with the new rotated turbo setup. On ECS mustang dyno it put down 458 whp and 352 ft/lbs at 25 psi on pump gas/meth. The car was a night and day difference. It spooled 500 RPMs quicker and pulls like a train to redline. 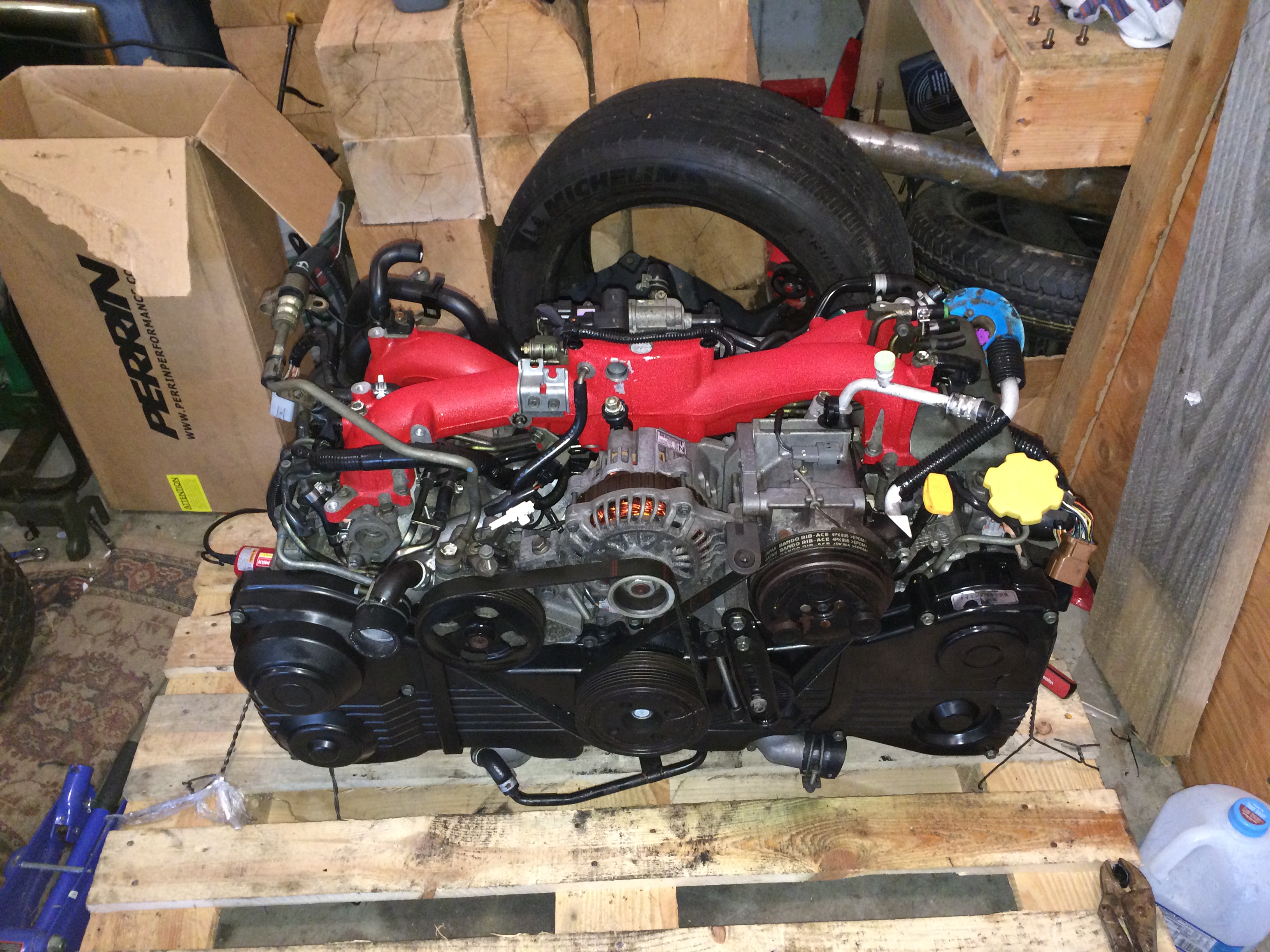 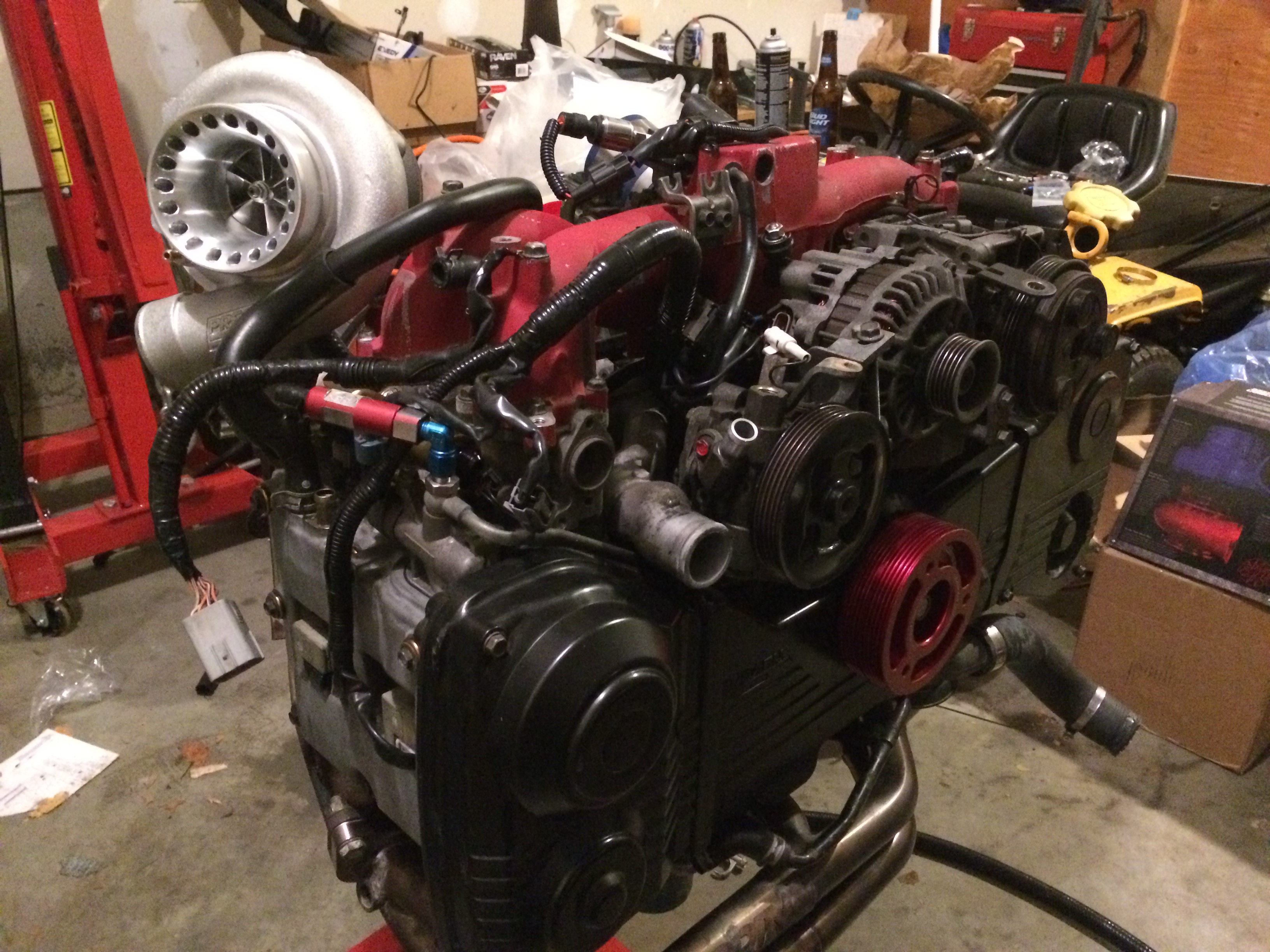 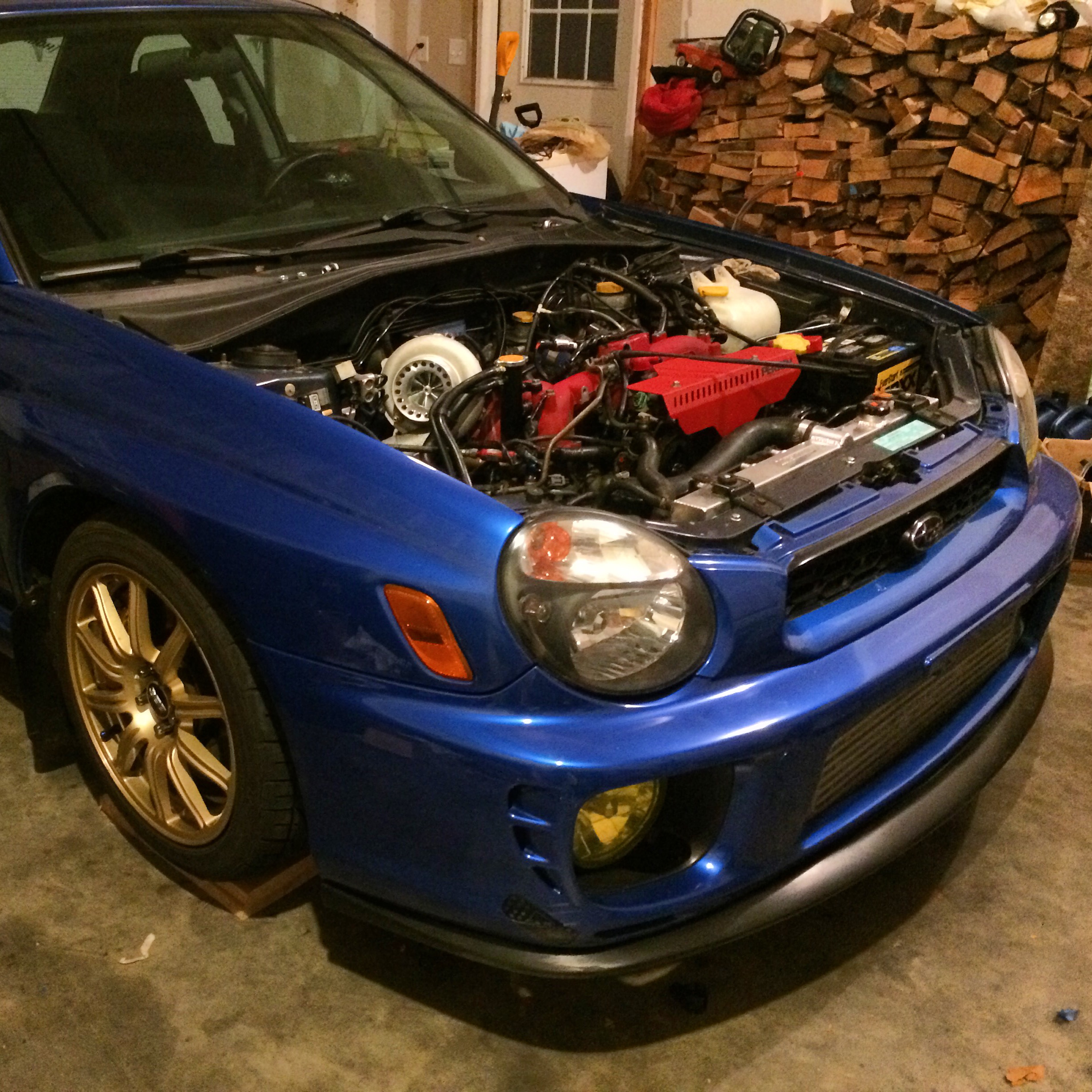 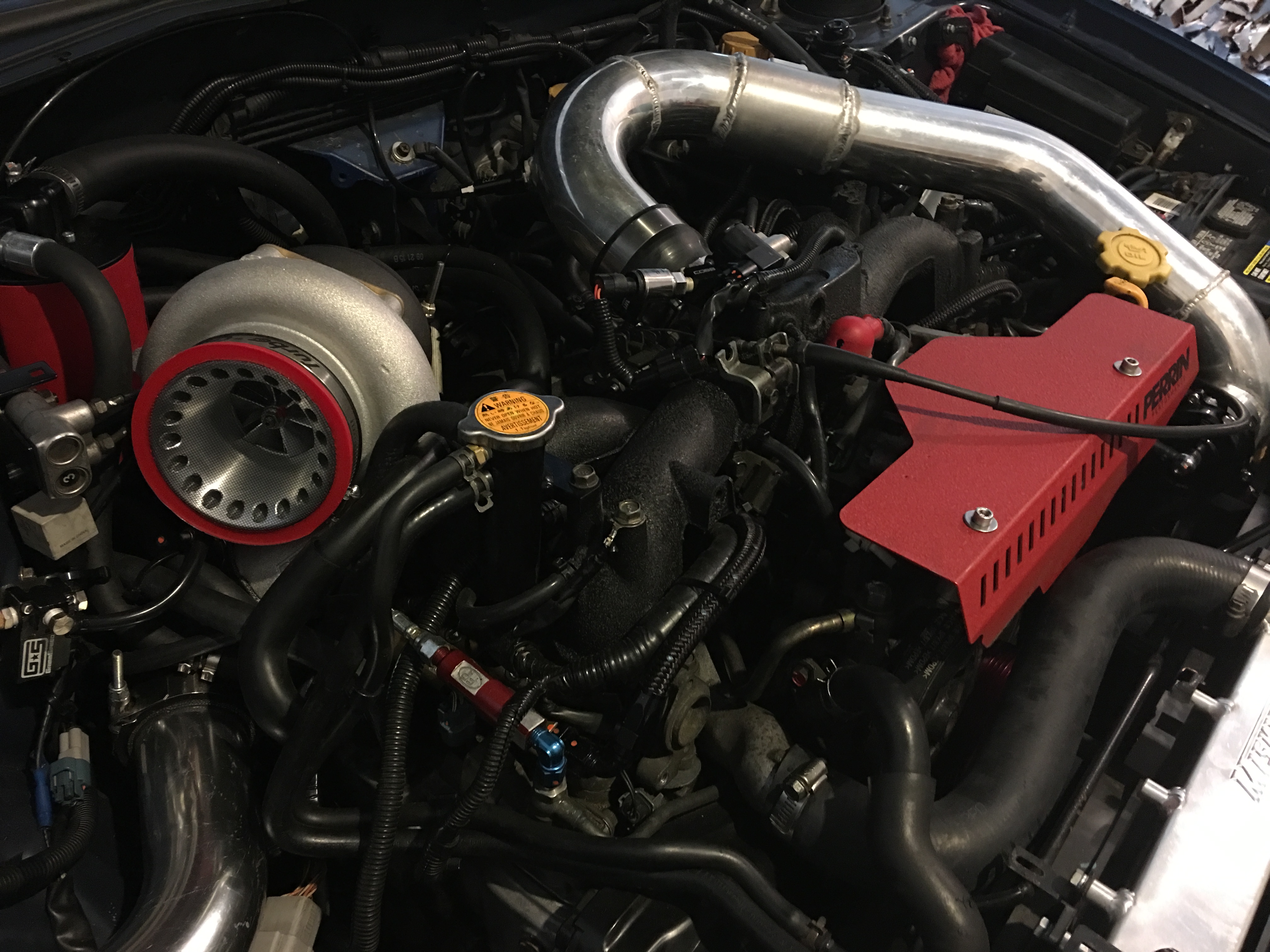 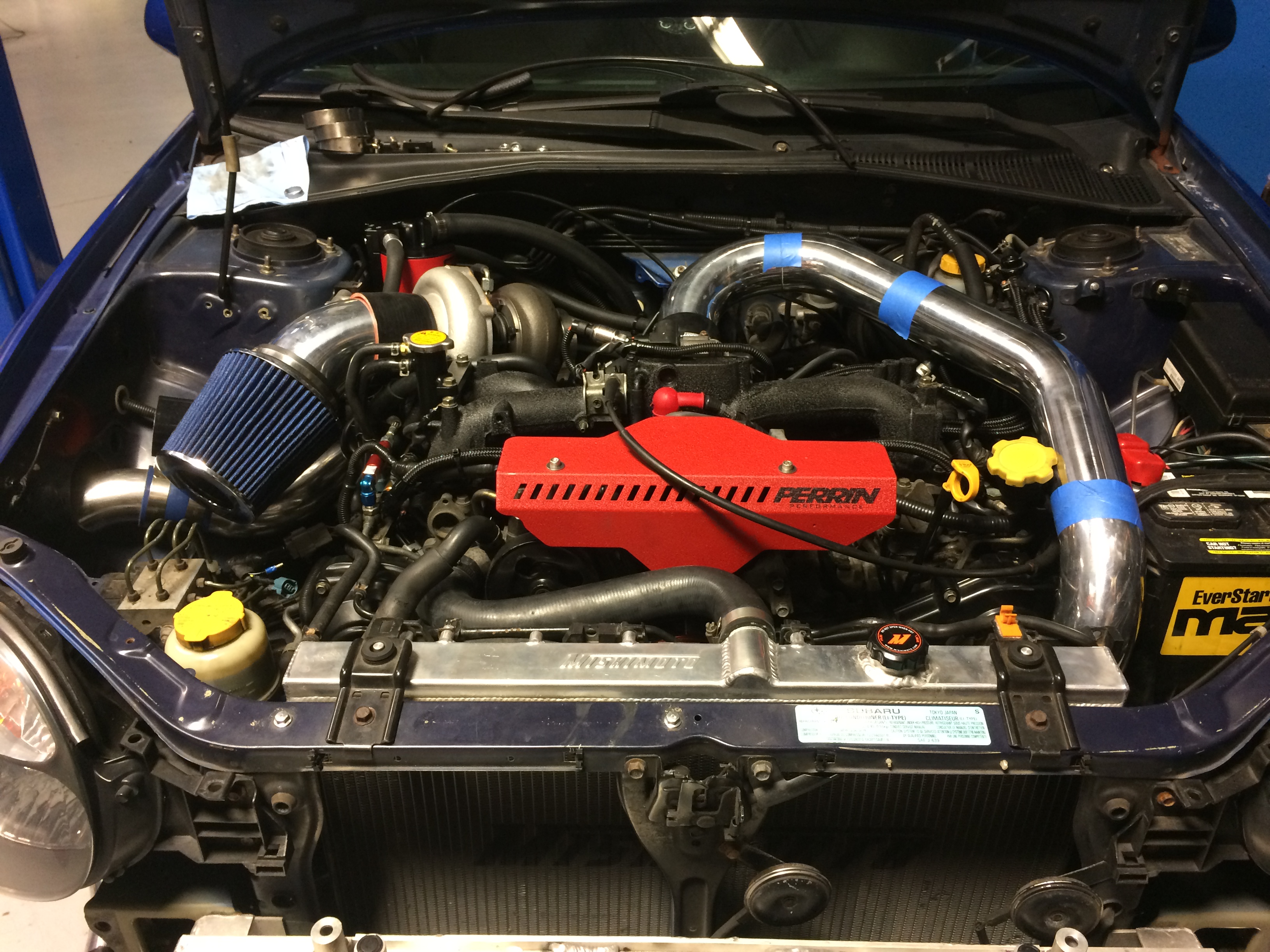 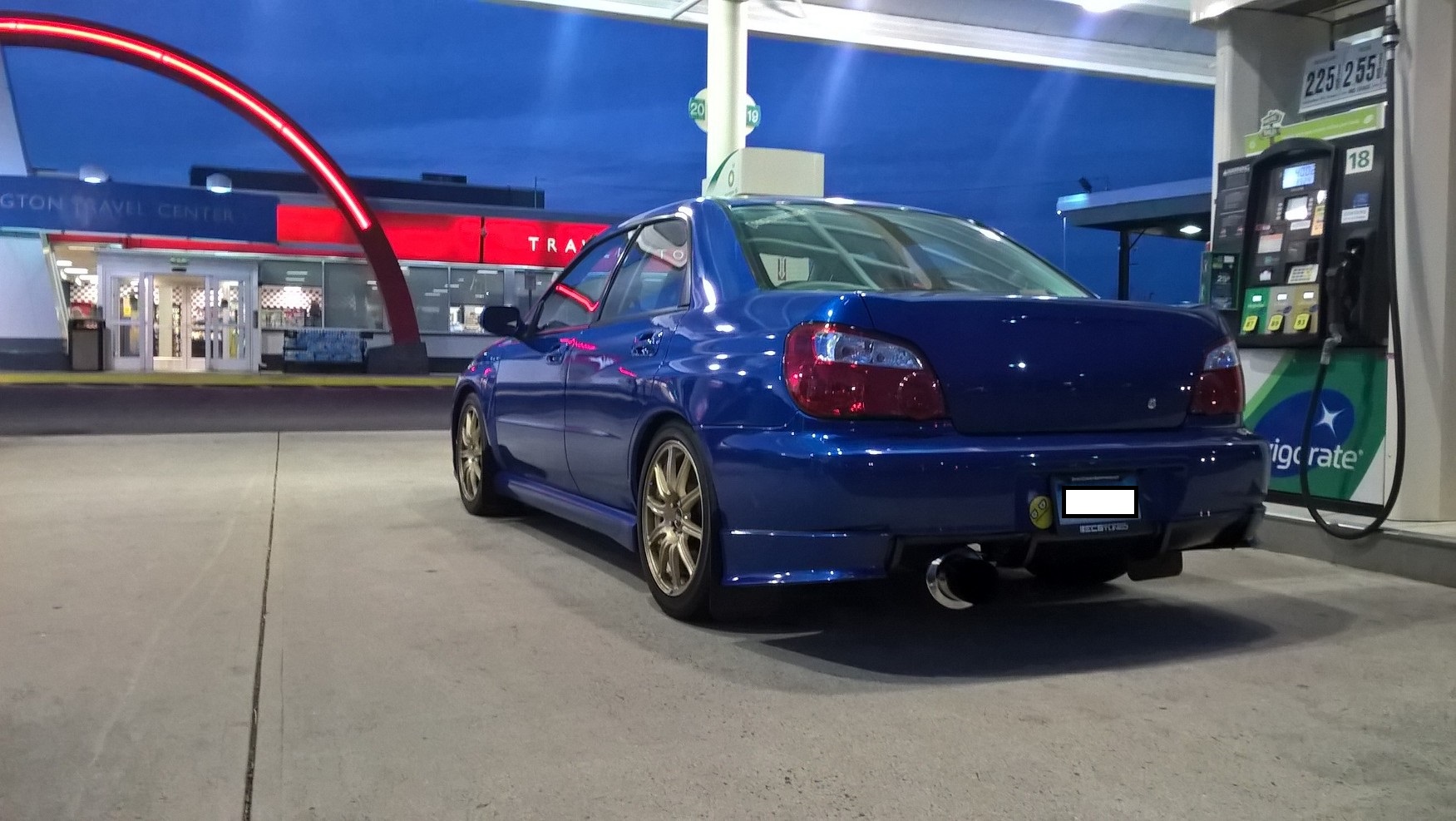 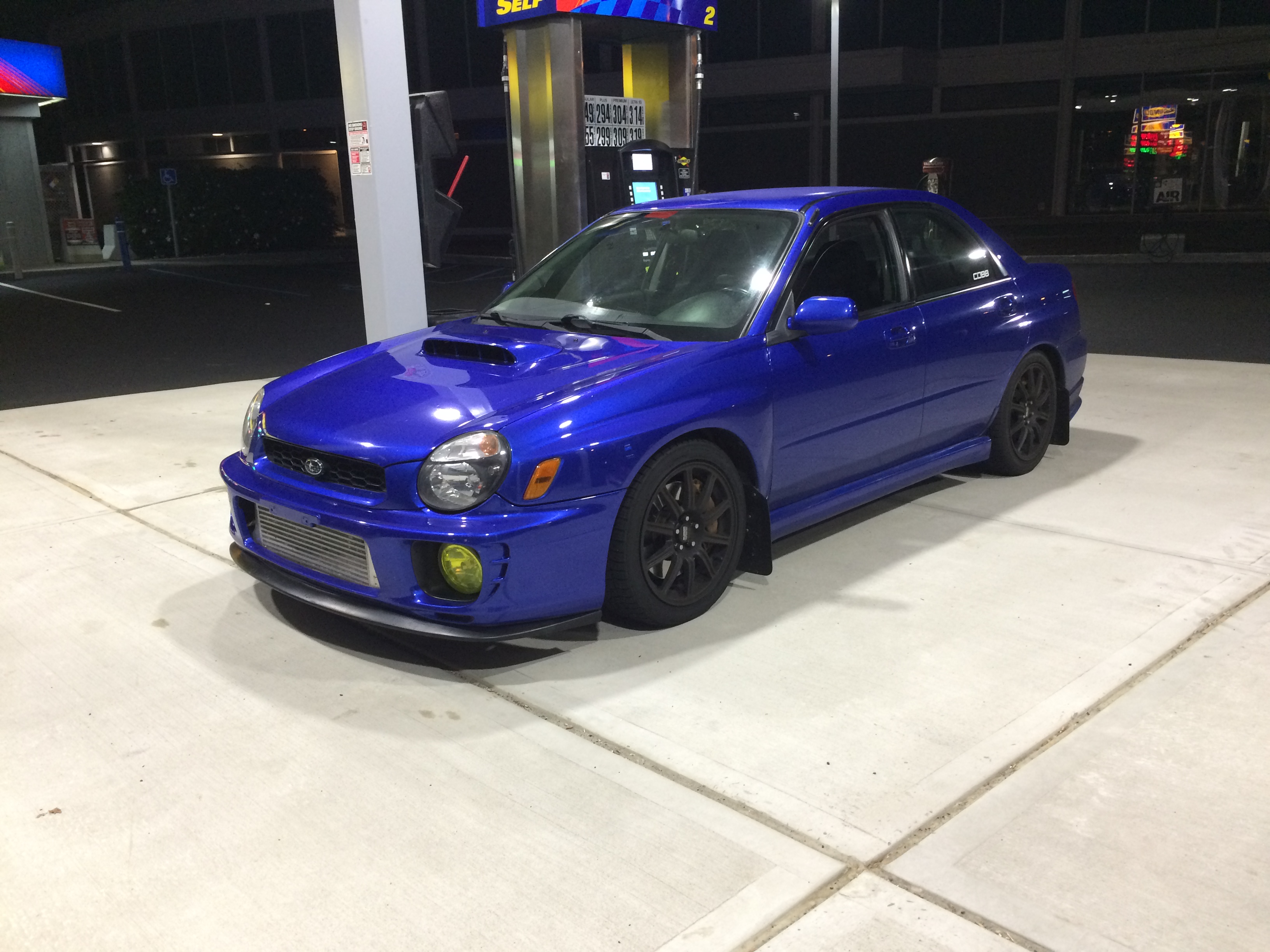 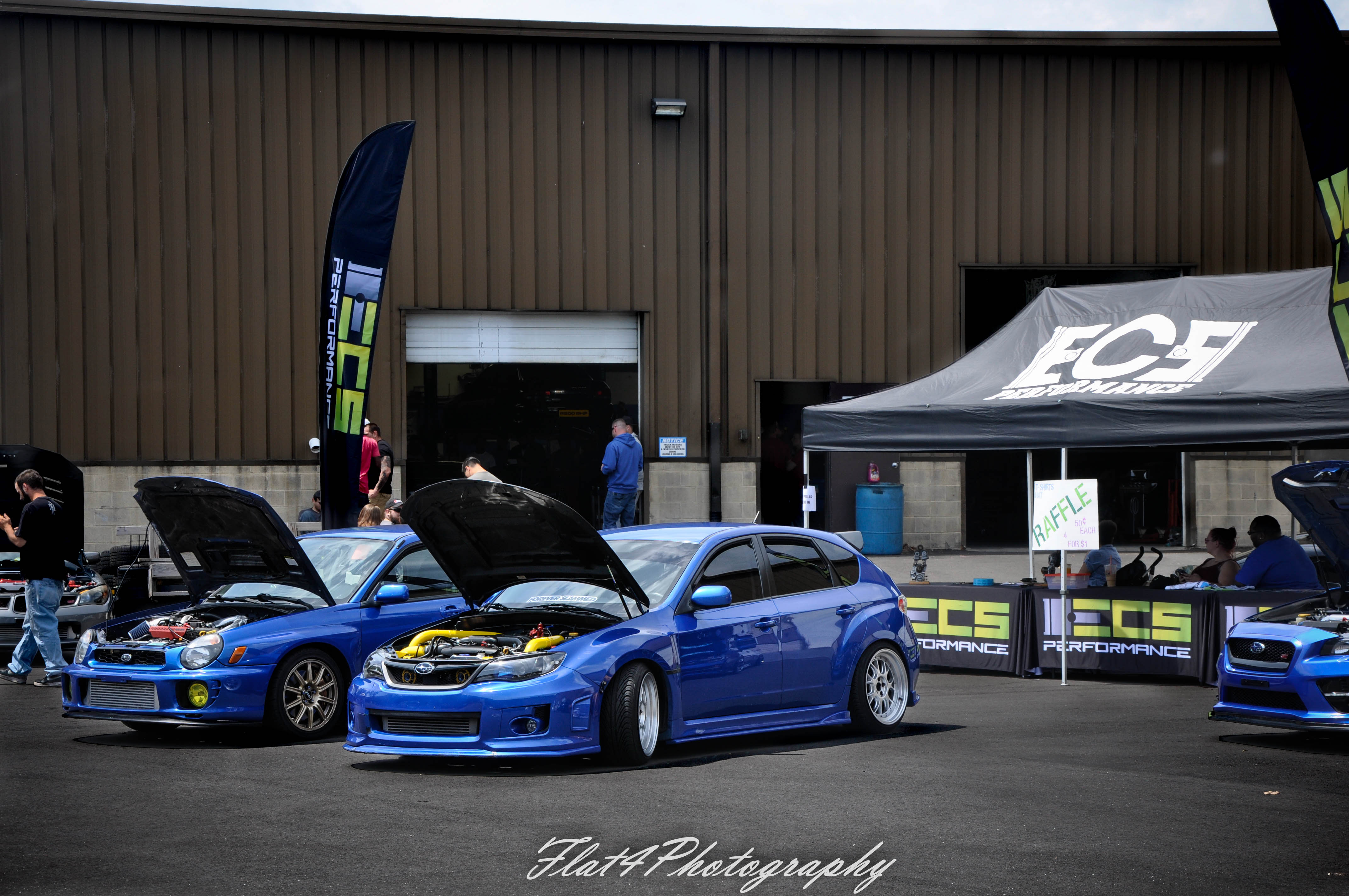