I’m Eric Oliver. On November 11, 2012, I was in dire need of a new car.  I was driving a 1982 Toyota Corolla Tercel, with No heat, No AC, it ran terrible, and had a bad exhaust leak, which would kil you if you sat with the car running in traffic.  I made a list of cars I’d like, and went shopping.  Among those cars was an Evo 8, a S60R, WRX (or STI), IS300, or an S4.  After a few days of shopping, I wasn’t able to find much in my price range that really spoke to me at a dealership, so I went home and looked on Craigslist again, and found this bugeye wagon. It had some modifications already, and I fell in love.

When I bought the car, it had an Alpine head unit, a JL 10w3 sub in an Audio integrations fiberglass enclosure, Tien Mono Flex coilovers, RPF1’s, VF34, sti pinks, Cusco front and rear strut tower braces, whiteline rear sway bar, Grimmspeed up pipe, Helix downpipe, and Borla Hush exhaust.  The car was perfect. It needed a clutch, but that was all.  I didn’t want to do ANYTHING to it…. We all know how that works.

I bought a new clutch right away, and installed it (Exedy Stg1 with ACT Streetlight flywheel), and all was well.
Then I decided the OEM headlights were garbage, and unsafe, and that I wanted to improve them. I did some research, and decided on a Morimoto Mini H1 HID retrofit.  I bought all the parts, and installed them, and they were awesome. I bought them from www.theretrofitsource.com, and they were awesome as well, with initial purchase, and warranty issues almost 2 years down the road when a bulb went out.

After that, I got rid of the RPF1’s and got some 18x9.5 Rota Grids, which then meant I needed more fender room, so I contacted my friends at JSPEC/ JDM Racing Motors, to explore my options, and we decided on a Version 7 STI front clip. I had it shipped to me, and couldn’t wait to install it. While doing so, I replaced the stock, useless fogs with Hella 500FF Driving beam pattern lights, which bolted right in, with minimal modifications, and provide excellent auxiliary lighting to compliment the high beams of the Mini H1’s on back roads, and empty highways.
Once that was done, I was honestly done, and very happy with the car UNTIL I got the dreaded cylinder 3 misfire code. I troubleshot, and did a compression test, which showed that cylinder 3 was only at 85psi.  It was time to figure out how I wanted to fix it. I had a few options, do a 2.5 hybrid, build the 2.0, do a stock rebuild on the 2.0, or buy a short block.  Then I found out about the EJ207.

If you go on any forum, you’ll find info on the EJ207, ranting and raving about how smooth it is, and how good it sounds, so once again, I contacted my friends at JSPEC/ JDM Racing Motors, to see what they had available. They had a few Version 7, a couple Version 8, and a couple Version 9 EJ207s.  After sending me pictures and prices of each engine, and some options on cost savings (since I already had a VF34 from a V7 spec C, and the V8 sti TMIC) we settled on my Version 9 EJ207 with 34k kms with no turbo, and no TMIC.

When it got to me, it looked absolutely brand new. It didn’t look like it was wiped down with dressing, to make it look good in pictures. It looked brand new, no dust in nooks and crannies, no corrosion, or anything. It was perfect.  Even though the miles were super low, I decided to do a bit of maintenance before putting the engine in, just so I could have record of the miles when the maintenance was done.  That maintenance was Gates Timing belt kit, water pump, spark plugs, and rear main seals, along with removing the green brackets of death that cover the injectors.
The swap was very straight forward, it bolted right in with my original 5 speed clutch and flywheel setup, and I wired the AVCS in with the help of an IAP AVCS harness, which was very easy to install, and looks very OEM unless you know what you are looking for. I was done with the swap in 2 easy days with just my wife and I doing the work.

In the time since I did the install (3 years ago) I have left it relatively untouched. I shattered 2nd gear, and replaced the transmission with a 2006 sti 6 speed, and a DCCD Pro from Spiider, and kept the same clutch and flywheel setup from my 5 speed.  I changed the clutch after another year, when the Stg 1 just couldn’t handle the added torque anymore. I replaced it with a 6 speed setup, which consisted of an ACT Streetlight flywheel, and Southbend Stage 2 Daily clutch kit from Turn-in Concepts. I also took this time to get rid of the blown coilovers, and replace them with ISC N1 coilovers (which I love), and 2013 WRX wheels. Once that was done, I was happy with it.

That lasted about a year, until I had the opportunity to drive another car for a few months, and take mine off the road. I got to drive a friend’s 2003 Evo VIII while he was on deployment, which gave me time to really do some modification, and beautification, without rushing.  I took this time to have a friend make a custom rotated up pipe, and downpipe, along with custom intercooler piping.  I took this time to shave, and rotate the intake manifold as well as do a lot of powdercoating.  I also had a local friend Autoflex the whole car in a custom purple that I mixed up, just to set the exterior apart from every other WRB bugeye wagon.


The car is a blast now, at 22psi and excellent spool, and I think I’ll keep it like this for a while.

If anyone has any questions, let me know. 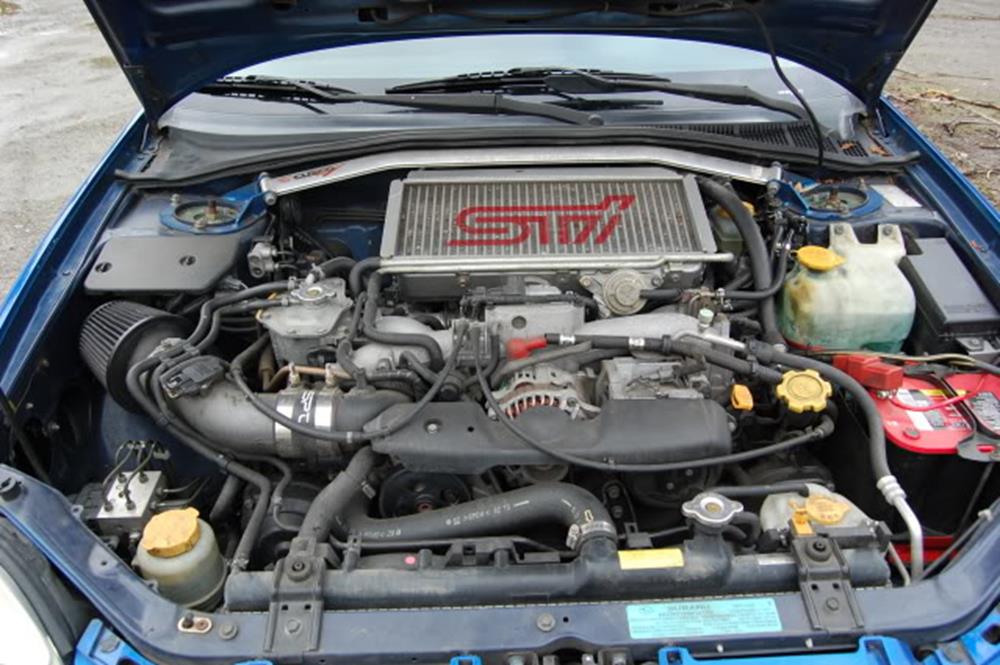 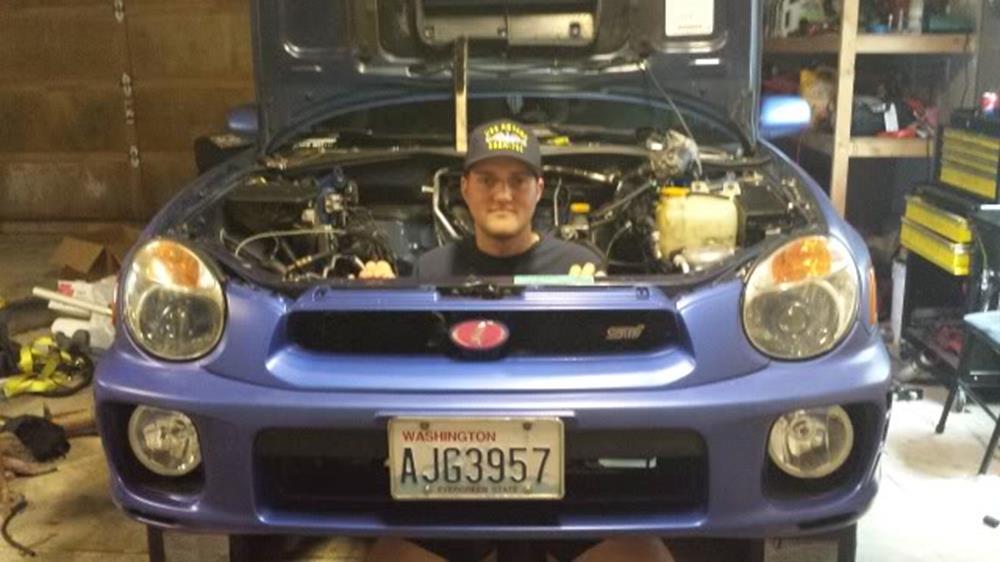 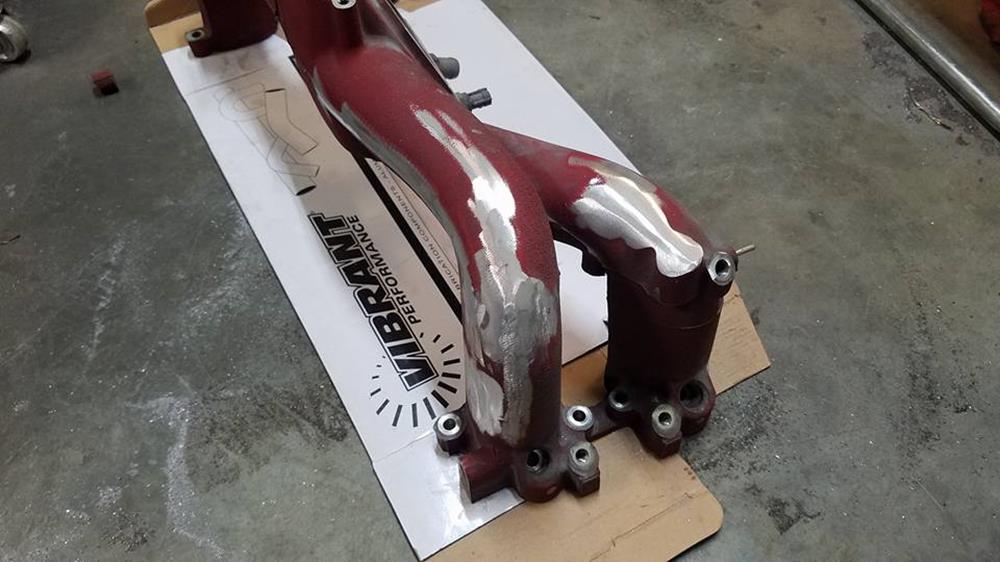 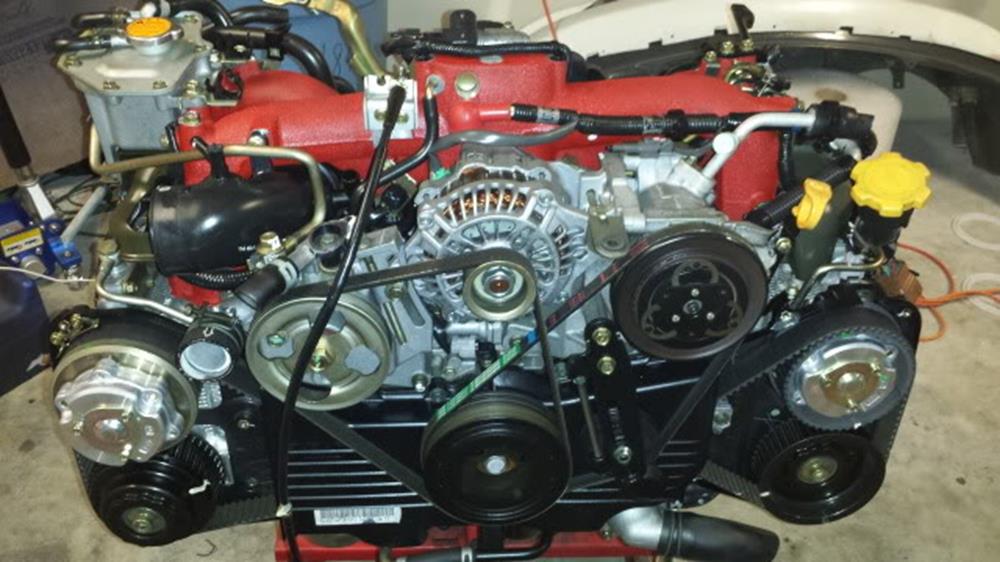 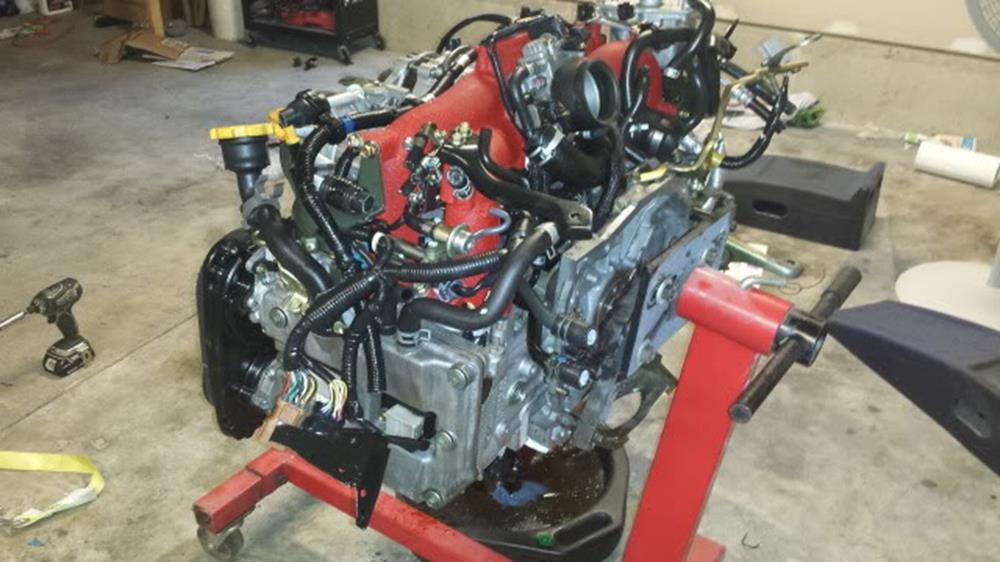 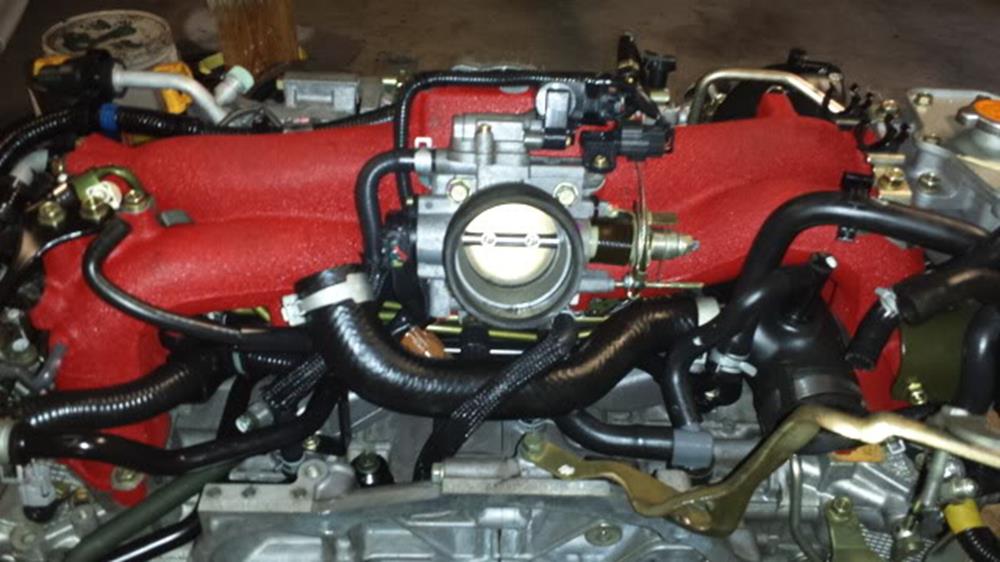 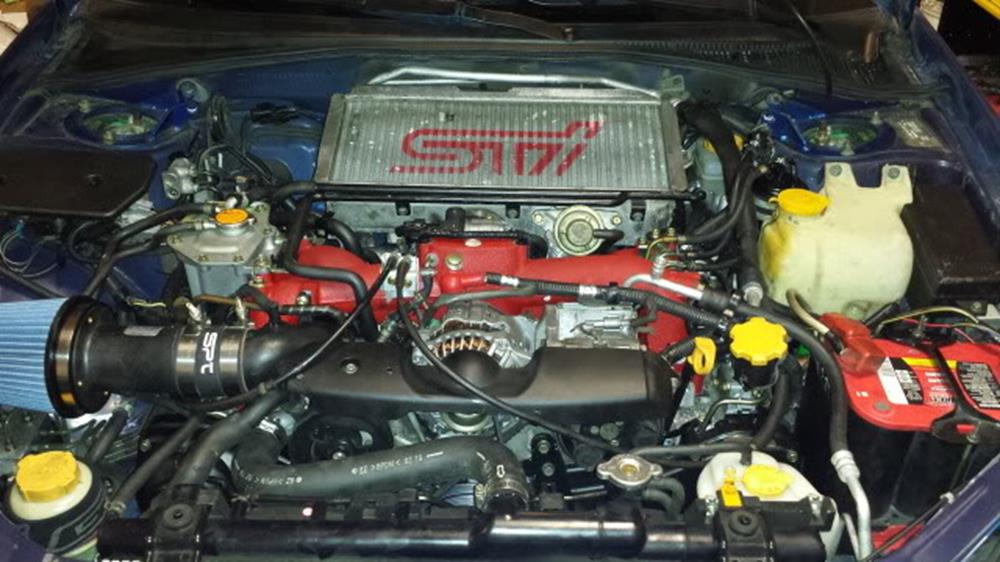 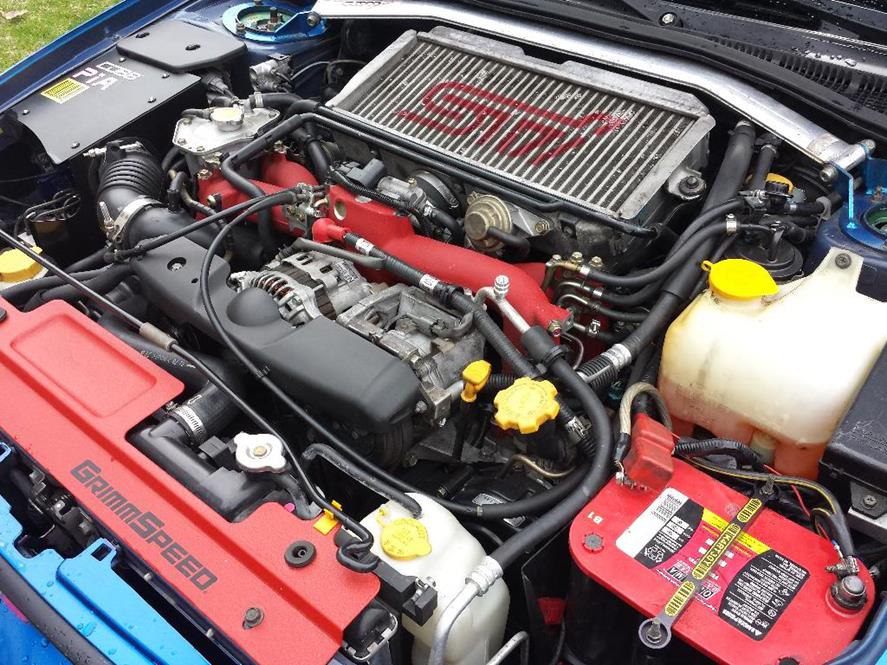 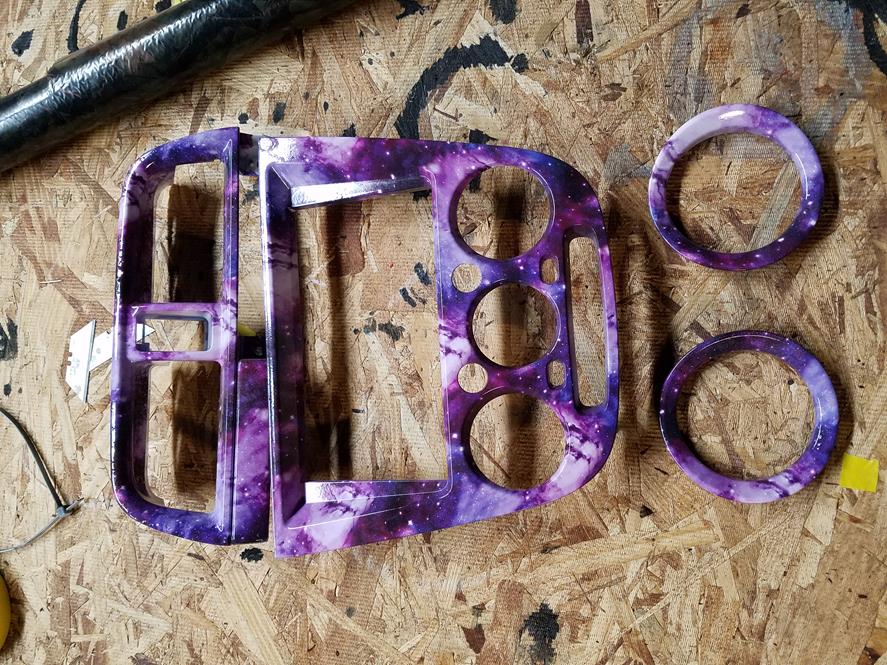 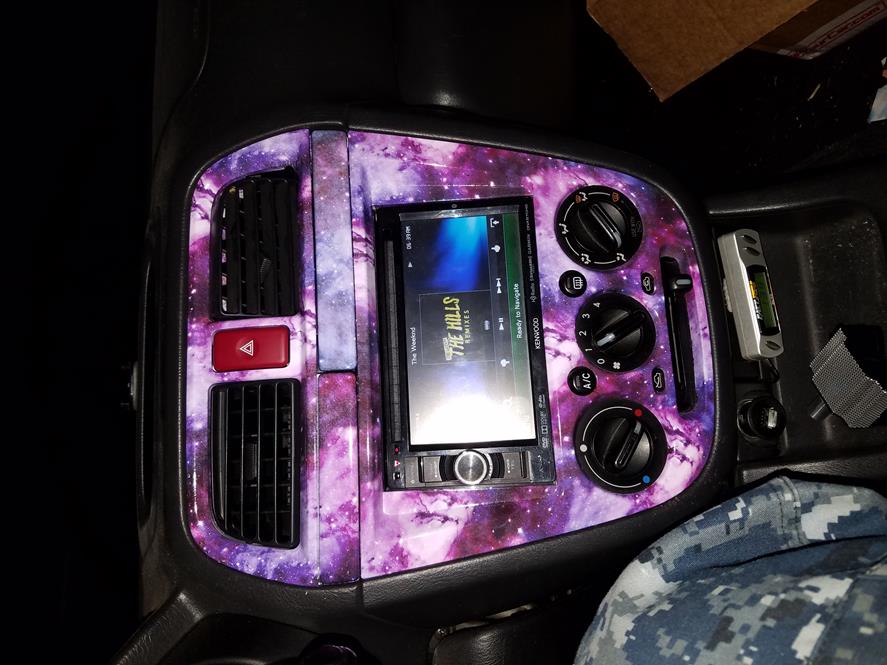 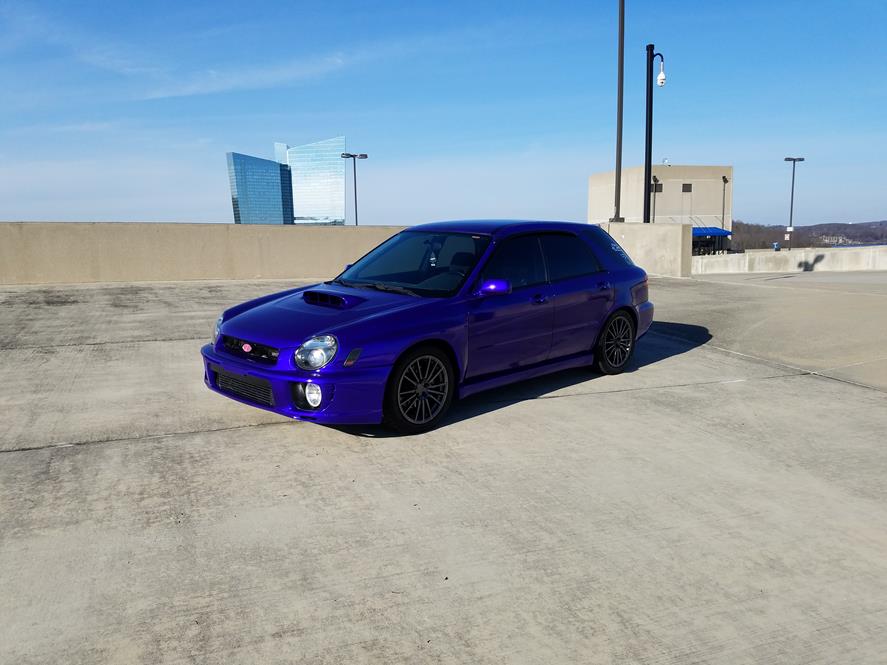 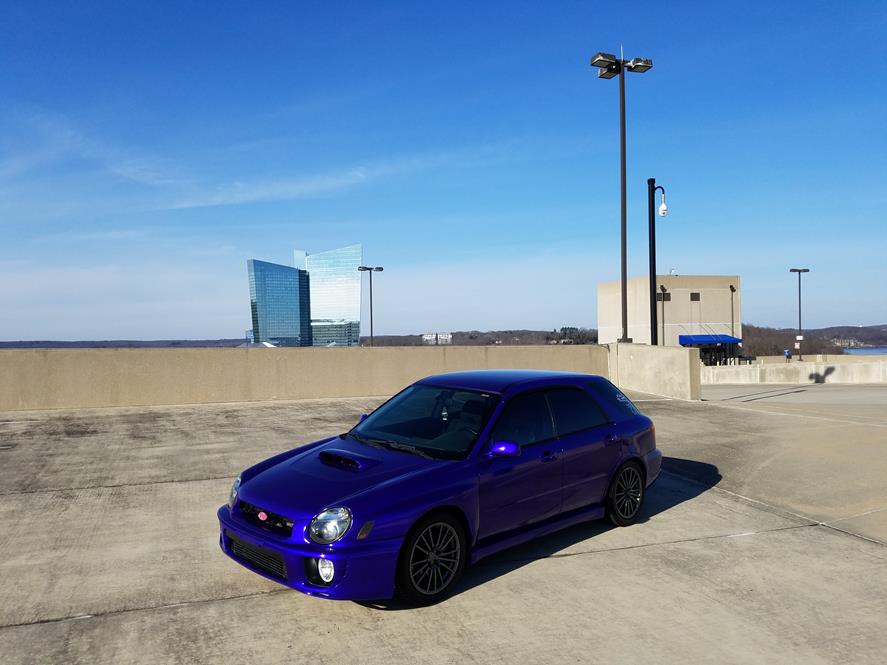 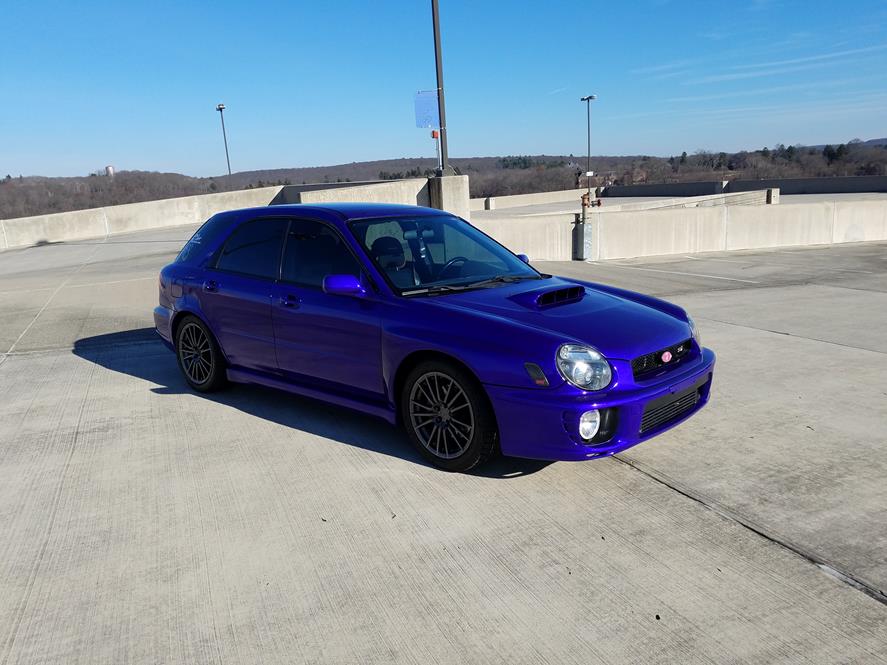 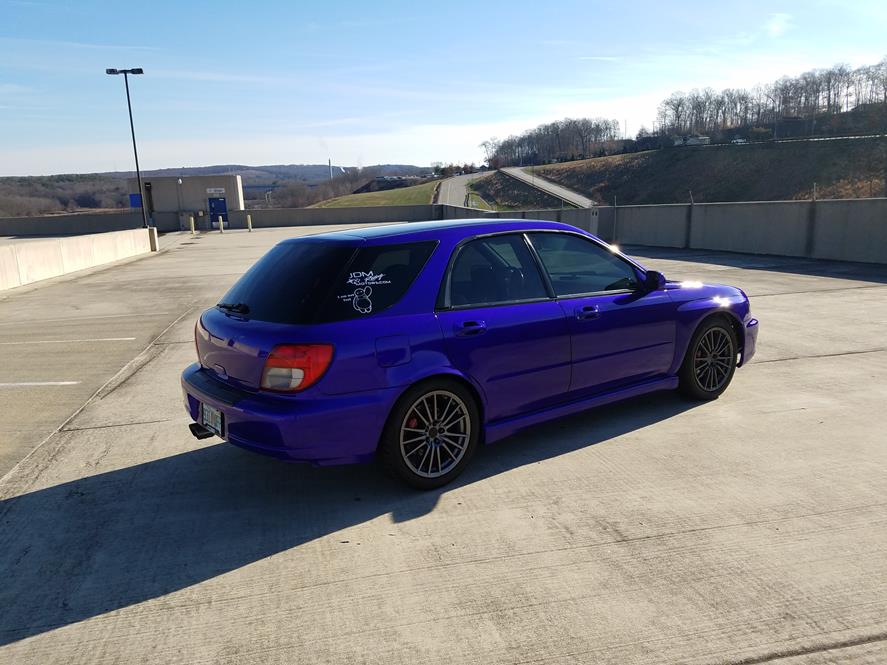 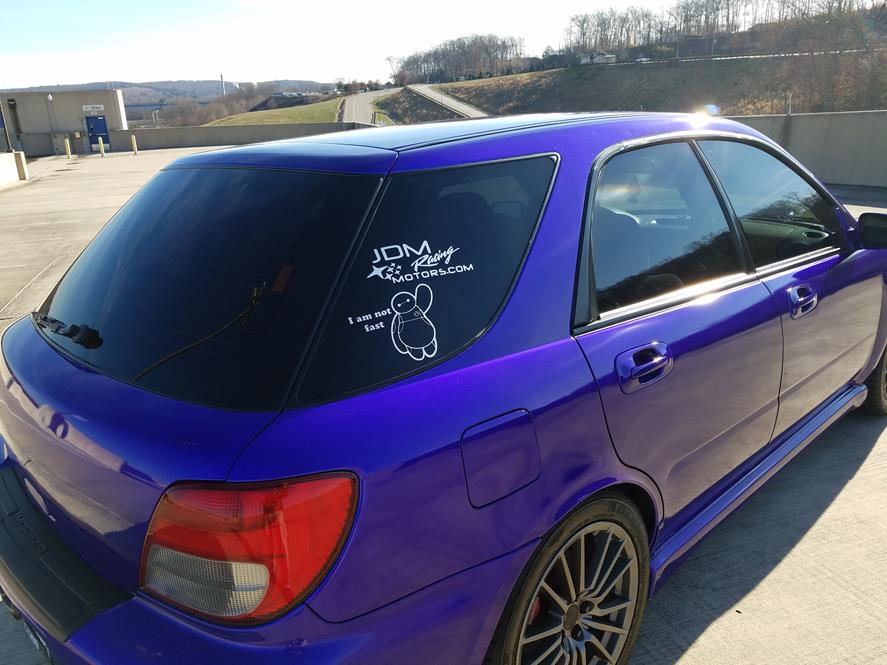 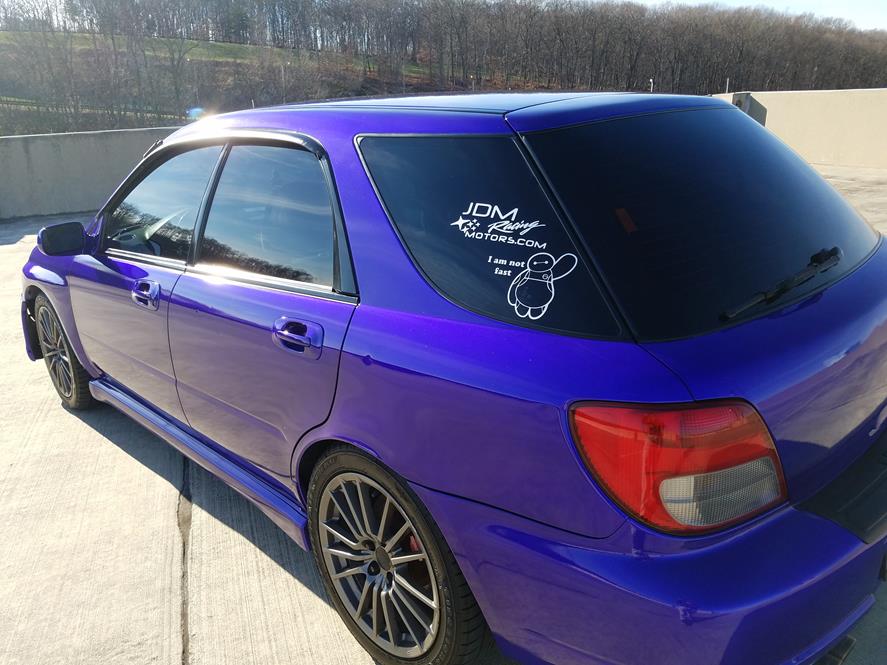 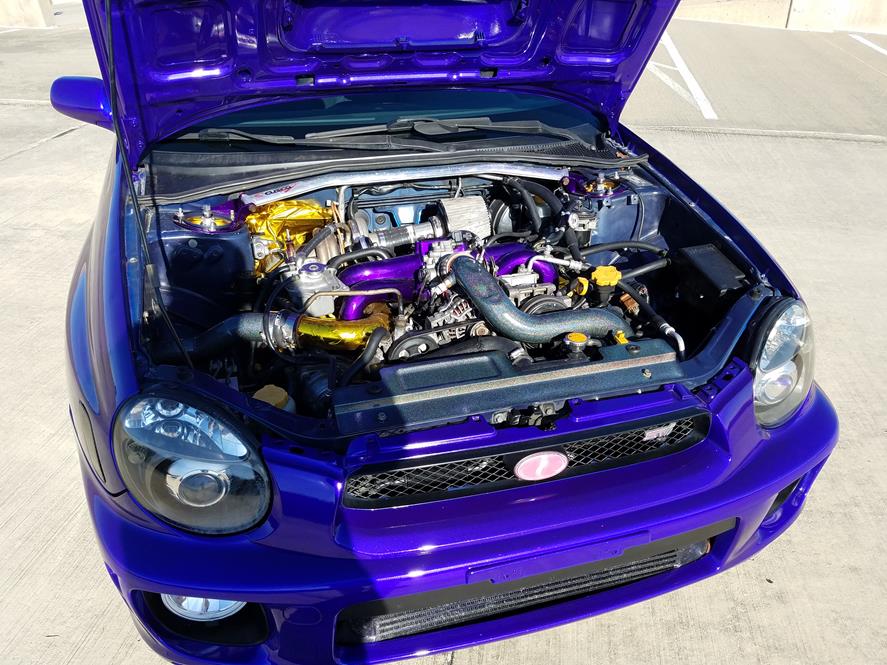 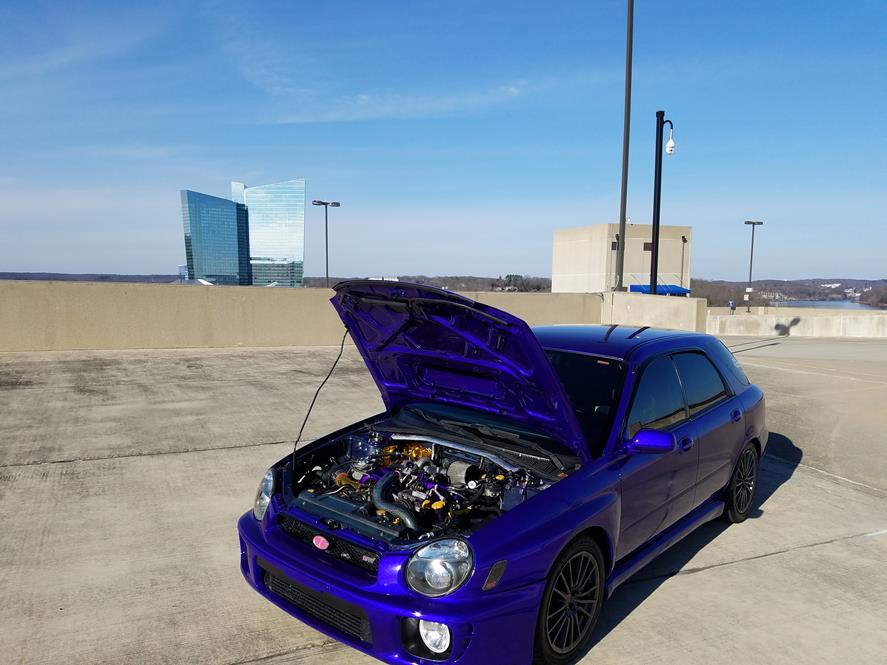 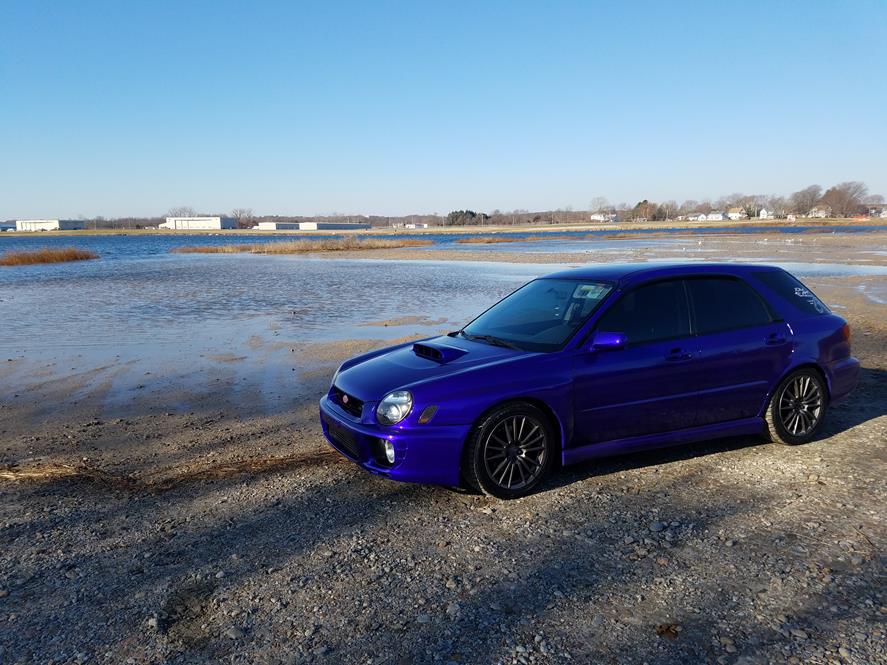 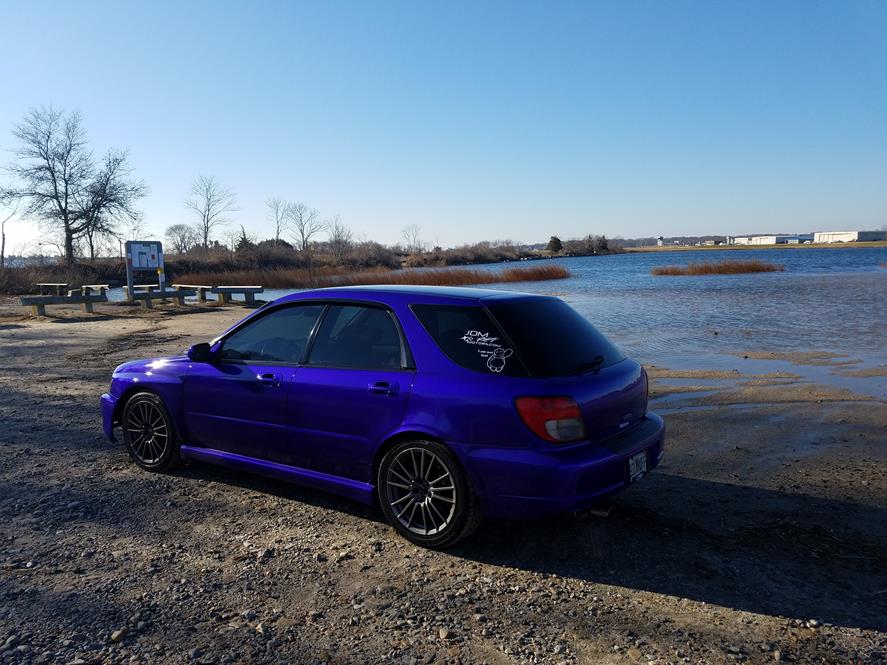